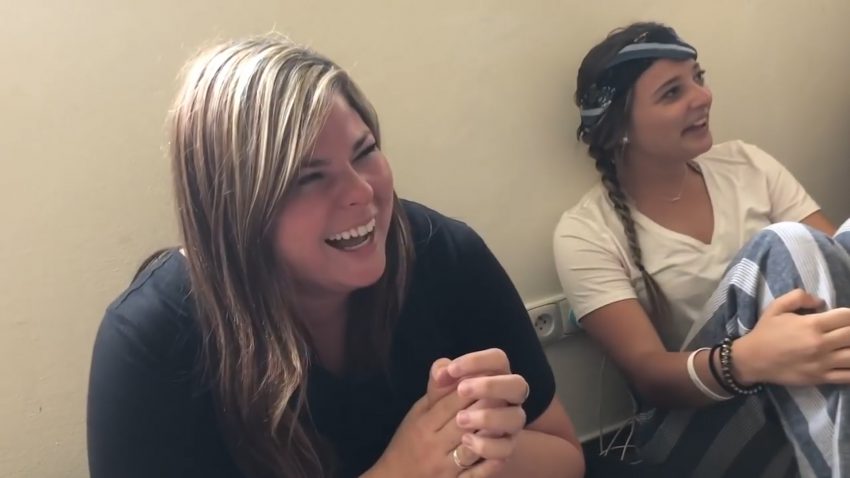 After days of travel and training, we were finally settled into our camp nestled on the mountain at an old ski resort.  It was a challenging afternoon of being pushed out of my comfort zone as I tried to make friends with teenagers that spoke an entirely different language than me; so, you could say I was feeling a little weary. It was my first time in the mountains, and I needed a quick escape to refresh, so I planted myself right on the edge, and slipped in some ear buds. Tired and feeling a little testy, I found myself saying “God, if you’re so real – then show me!” Now, bear in mind, I was 15 years old and on my first mission trip – so I was not yet familiar with the command in Scripture that says, “Do not put the Lord your God to the test” (Matt 4:7). But at that time I was listening to “Mighty to Save” by Hillsong, and it had just hit the climax saying, “Shine your light and let the whole world see” when right then, the sunshine burst through the clouds between two perfectly positioned peaks, and a powerful fog rose up from the valley between. At that moment I knew God was real, very real – and He wasn’t joking around when He brought me to the Czech Republic that summer, and as he sent me the following 12 years.

Fast forward nine years, I am planted in my English Class for the fourth year in a row, and there is this young gal with strawberry blonde hair, who errs on the side of shy. For years, she has faithfully attended this festival, watched and interacted with believers as she listened to story after story about their lives being changed by the God of the universe who has rescued them out of darkness. It was the last day of the festival, and I’m sitting on the patio and I’m nearly trampled by this girl running towards me. Her eyes full of tears, and a smile stretching from ear to ear, she throws her arms around me and says, “I finally did it! I finally decided to give my heart and my future to Jesus!” Those four years of preparing support letters, taking time off of work, attending long meetings, and writing class lessons was more than worth it for that one moment, for that one life saved by the grace of Jesus Christ. Jesus says in Luke 15:10, “In the same way, I tell you, there is rejoicing in the presence of the angels of God over one sinner who repents.” What a privilege and an honor it was to rejoice with her and the angels in heaven at that moment!

Having spent so many years serving in Czech, I could write a whole book on the countless works of God I’ve witnessed, but the story above felt the most appropriate for this. You see, Jesus says, “The harvest is plentiful, but the workers are few.” (Luke 10:2) Missions (the harvest) seems to be very near and dear to Jesus’ heart as He refers to it several times during His time on earth. How many times do we see Him say, “Go?” We see this when he meets with the disciples on the mountain in Galilee, giving the Great Commission, saying, “Therefore GO and make disciples of all nations, baptizing them in the name of the Father, the Son, and the of the Holy Spirit, and teaching them to obey everything I have commanded you.” (Matthew 28:19-20) But the word “go” seems to be misunderstood these days. “Go” can be as simple as walking out your front door and taking 100 steps to the left as you “go” to your neighbor’s house. Acts 1:8 says, “But you will receive my power when the Holy Spirit comes on you, and you will be my witnesses in Jerusalem, and in all Judea and Samaria, and to the ends of the earth.”

Whether the Lord is leading you to your Jerusalem (your neighbor’s house), or to Judea or Samaria (your country), or to the ends of the earth (foreign country) – we are called to, “Go!” Romans 10:14-15 says, “How, then, can they call on the one they have not believed in? And how can they believe in the one of whom they have not heard? And how can they hear without someone preaching to them? As it is written, ‘How beautiful are the feet of those who bring good news!’”

So, let’s go! Let’s move our beautiful feet and GO share the good news of our Lord and Savior!

Megan Natrop (Hatfield) graduated from the University of Northwestern, St. Paul with a major in Communication Studies alongside a double minor in Youth & Family Education, and Biblical Studies. She has served on the Czech Republic missions team for 12 years as both student and later a leader; and now serves on Friendship Church’s Missions Committee. Youth Ministry is another passion over hers in which she has been serving for the past 6 years. Along with her husband, Joshua, they fill their free time with traveling, camping, hiking and exploring state parks with their Golden Retriever.