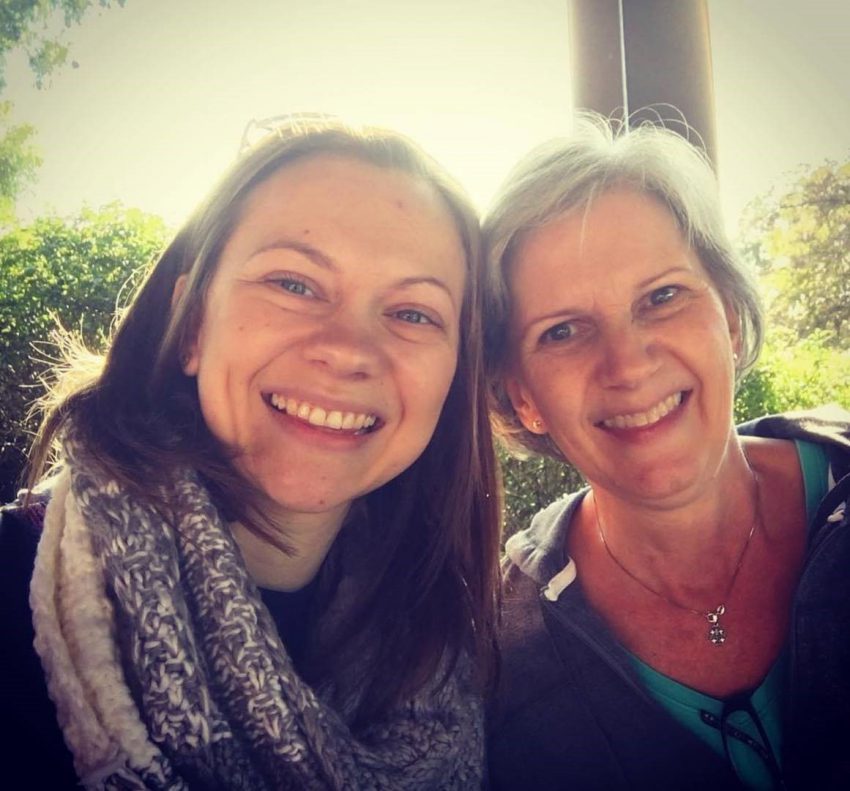 Have you ever had a moment that rocks your world?  That takes everything you’ve ever known, and within seconds, sends your mind racing and disorients you? For me, this moment happened just over a year ago when my mom was diagnosed with breast cancer.  In an instant, my world flashed before my eyes.  There was so much unknown and so much fear that hit me within a matter of seconds.  It hit me “like a ton of bricks,” as my dad likes to say.  I’m sure you’ve had at least one of these moments in your life, but for me, this was one of the biggest earth-shattering moments I have ever experienced.

Throughout the next six months of treatment for my mom I wrestled with the age-old questions: Why? Why me? Why my family? Why would God allow this?  I struggled with the doubt that all of this brought about in me.  I felt guilty, that as a believer I struggled so much with these questions.

I felt like, as a Christian, the verse James 1:2 should have been my go-to response in a situation like this!  I’m sure you’ve heard the verse, “Consider it pure joy, my brothers and sisters, whenever you face trials of many kinds.”  Now, don’t get me wrong, there is so much truth to this verse!  And honestly, this verse has been one of my favorites for as long as I can remember.  But during those six months, I found myself struggling to find joy and I felt guilty about it!  I felt like, as a believer who is seeking Him and wholeheartedly following Him, shouldn’t it be easy, or at least easier, to find joy in my trials?

I wrestled with these questions until I came upon the story of Job.  I’m sure many, if not all of you, know the story of Job, right?  The guy who had horrible things happen to him: his family was killed, his herds were stolen, his crops were destroyed.  You name it and it happened to him.  Talk about a guy who had crisis hit out of nowhere!  I have always understood the story of Job to be a story of Job’s faithfulness and fear of the Lord.  And while this is true, I came to realize that it is also a beautiful story of Job’s wrestling and trying to understand why all those things happened to him. While I don’t have space to put the entire book of Job here for you, I would encourage you to read it if you haven’t already.

The book of Job is the story of how he wrestled with God about tough questions in his faith.  Job struggled to understand why God would allow such terrible tragedies to happen to him and his family.  He struggled with the concept of God being just.  If God was just, then why would He allow those tragedies when Job didn’t do anything wrong? It says in chapter one that Job was a righteous man!  Job wrestled with his understanding of who God is, and what that meant for him and his relationship with God.  But perhaps the most important part of the story, I came to learn, is Job’s response to God.  There are two responses that stood out to me as I read the book of Job.

First, we see in chapter one verse 20 that Job responds by worshipping within his grief. “Job got up and tore his robe and shaved his head. Then he fell to the ground in worship.”  Job didn’t wait for the grief to pass and he didn’t hide his grief from God.  He came to God in the midst of his grief, in the midst of his deepest sorrow, and worshipped Him.  After everything was taken away, his family, his herds, his servants, everything he had, he CHOSE to worship God.  Tearing his clothes and shaving his head were both signs of mourning.  But even in the midst of the mourning, he approached his Heavenly Father.  You see, the reality is that God can handle our grief.  God wants us to come to Him in our deepest despair and cry out to Him.  To sit in His presence and mourn the things that we have lost.  To struggle and wrestle with the deep sorrow that we are feeling.

Second, we see God interact with Job’s questions and Job’s response to God as a result of that interaction.  Job comes to God with all that he is wrestling through, all of his “why” questions that he doesn’t understand, and God responds!  God hears Job and doesn’t leave him to wrestle through it on his own, but instead He meets him in that place to work through the questions he is struggling with.  God doesn’t give Job a straightforward answer to why he is suffering or why those things were happening, but by the end of God’s exchange with Job in chapters 38-41, we see a beautiful response of humility and reverence from Job.  Job understands that God, in all His infinite wisdom, knows more than Job will ever begin to grasp.  Job knows that God’s ways are sovereign and perfect, and that while he may never understand them, he must choose to trust in Him.

Through those six months (and more!) of my own wrestling and searching I came to realize that it was okay to wrestle with the reality of the trials I was facing.  It was okay to ask God, “Why?” and bring my struggles to Him.  To sit with Him in the midst of my grief and wrestle through what I didn’t understand.  If Job could do it, why can’t I?  In the midst of my deepest grief, I can choose to worship Him and come into His presence.  I found that where grief and worship collide, is where true relationship with Him can be found.

I am blessed to be able to sit here today and say that my mom is cancer free!  I know that many stories don’t end this way, and I thank God daily that He provided healing for my mom.  But I’ve also learned this: Regardless of the outcome, God is good!  His ways are higher than mine and His wisdom is vaster than I can ever begin to understand!  It is okay for me, for us, to wrestle with the tough questions!  After all, it’s what brings us closer into relationship with Him.

Amy Dahl grew up in Eden Prairie, and graduated from Crown College with a triple major in Child and Family Ministry, Youth and Social Ministry, and Biblical Studies. Amy has been working as the Connections Assistant at Friendship Church for just over two years. Amy has always had a passion and heart for people and loves serving alongside her husband Sam in the youth ministry. In her free time, she enjoys spending time with family and friends, gardening, taking walks, and crocheting.