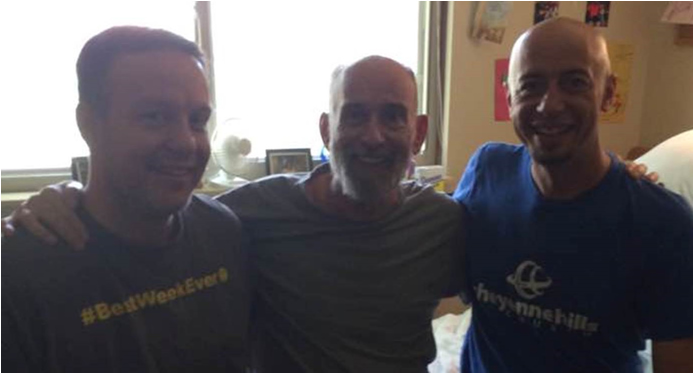 I remember hearing the words, “Faster than a speeding bullet! More powerful than a locomotive! Able to leap a tall building in a single bound! It’s a bird! It’s a plane! It’s Superman!” Superman was indestructible. Every week when watching Superman there was a threat! Yet Superman was always willing to sacrifice his well being for others. However, in each episode Superman won! He could not lose. I think that is why it was a such a shocker when seeing the ending scene of Batman V. Superman. Superman was not just defeated he was dead…. AND BURIED! I remember walking out of the theater dejected! Hurt! I can’t really explain why… until the last day of Summer 2017… my dad died.

Death isn’t Supposed to happen to him:

Superman was not supposed to die… and I thought my dad shouldn’t ever die either!!! As a boy, I remember seeing dad as a super-man. Perhaps one reason was that he said Superman was his brother and they were separated at birth (I believed that until I was 12 years old… don’t judge me, he was a really good storyteller)! I watched how he interacted with my mother, with me, with my brother, how he worked at the house, how he laughed and wove a story. I marveled at who he was and held on to every word, every tickle, every moment. To me, dad was Superman! Not saving the world (or even Lois Lane) but rather he was the picture of how a man should be and he seemed… SUPER! He was the pinnacle of who I could be.  When my dad died…. I didn’t know what to do!

If I’m telling the truth (and I am), I have to say that I still don’t know what to do with the loss of my dad, but I am learning to point up and move forward. Over the last few years, as I have been processing my dad’s death, I have been reminded of several things. Here they are:

My dad worked in shipping and receiving over 30 years. He thought he did not have much influence, but his life lessons and stories have influenced me and many others. The attendance of my dad’s “life celebration” service was full (we thought it was lame to call it a “memorial service”! We thought about saying “funeral” but decided against it, even though dad thought we should put the “fun” in “funeral” {He literally said that, “put the ‘fun’ back in ‘funeral’. I’m telling you he just looked at stuff a little different than most people])!

He would often say things like, “I’m satisfied with not leading.” But that is a paradox of life – we can’t not lead. John Maxwell says that influence is leadership, and everyone influences. Therefore, dad was very influential in his own way and by extension, he was a leader! I am reminded that everyone has influence. Heroes learn how to use that influence to maximize life. Some do it purposefully and others just do it because that’s who they are. My dad was the latter of the two, that is just who he was!

Everyone dies. I hate this one! I catch myself reflecting on Genesis 1-3 and think… “what if Adam and Eve wouldn’t have messed it up for all of us?!?!” We would have lived together…. FOREVER! However, sin has infected all of us! Hebrews 9:27 says, “… it is appointed for men to die once, but after this the judgment…” Lest we think we are immortal on this side of eternity we need to live in the reality that one day even the super-est of men and women will die. Heroes recognize this reality and live in this place. Tomorrow is not promised!

When God reveals His name to Moses, He says His name is “I Am.” That is important. The subtle reality of His name is a reminder of the present presence of God. We aren’t supposed to dwell in the past or live in the future. We have now to exist in and we do it with the LORD, the Great I Am!  Therefore, let us not forget that everyone will die.

We will meet again –

I hate that we die, but I am thankful that we don’t just return to the earth. We have been given great hope in 2 Cor 5:6-8, “ So we are always of good courage. We know that while we are at home in the body we are away from the Lord, for we walk by faith, not by sight. Yes, we are of good courage, and we would rather be away from the body and at home with the Lord.” For those who have surrendered to Christ (who is even better than Superman), they have been given eternal life and we will spend it together! Though my heart grieves, I can say with gratitude that “it is not ‘goodbye,’ just, I will see you later!” So… Dad, I’ll see you later! A hero can stand with great confidence during tragedy knowing that they are eternal creatures. There is no end! Heroes grieve but they don’t despair!

Christ is the ultimate example –

As I alluded to earlier, Christ is our ultimate example. My dad was great, but he had his flaws (just like every person before him and every person after him). Therefore, Paul’s words are especially meaningful as I consider my dad. Paul said, “Imitate me as I imitate Christ.” As I consider the life of my dad and remember his legacy, I will imitate those things that reflect Christ (less I unwittingly worship him… which often unintentionally happens after someone passes away). Heroes know who the ultimate hero is and point others to Him with their words and deeds!

“Faster than a speeding bullet! More powerful than a locomotive! Able to leap tall buildings in a single bound! It’s a bird! It’s a plane! It’s Superman!” Superman was indestructible… I thought. However, even Superman dies. Like Superman, but in different ways, my dad made sacrifices, but the ultimate sacrifice was made by Christ on the cross. On the last day of Summer 2017… my dad died. I will miss him, hurt for him, and I will also celebrate his life and the lessons he taught me! Dad was a super-man! Heroes can stand strong in loss and tragedy because the source of their power comes from on high! Let us put our hope and trust in the One who gives us life!

Kenny White is a hot mess! He is amazed that God loves Him and basks in the fact that “God saved a wretch like me!” Kenny accepted the LORD as His savior just prior to turning 18 and has been swept away in the current of following Jesus (and he doesn’t plan on returning). Kenny married his college sweetheart, Cindy! They have 7 kids and love spending time together. You may find Kenny on one of His 30 Day Challenges (they range from studying a new language to learning a few chords on a guitar to eating a specific diet to using his non-dominant hand for everyday activities) or on a prayer walk. Though Kenny doesn’t take himself seriously, he loves Jesus and wants to make Him known!