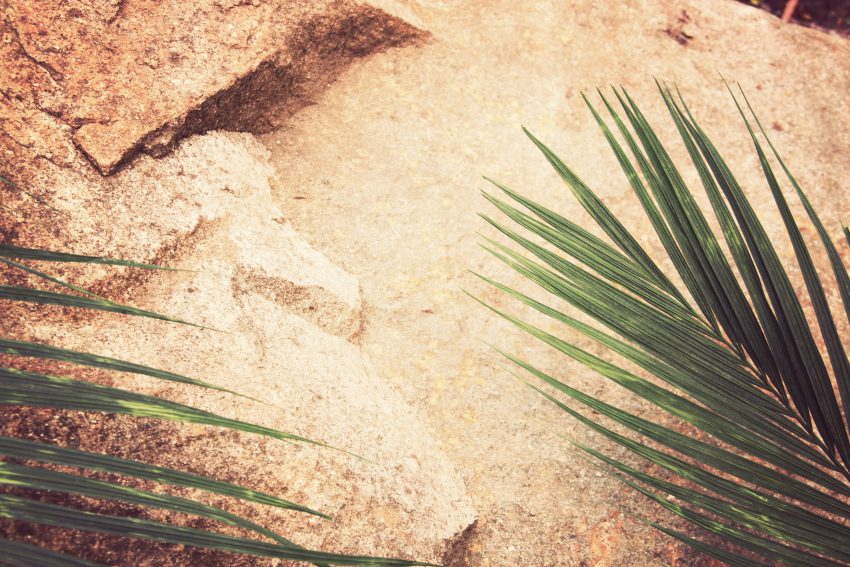 The Sunday, one week before Easter, is often referred to as Palm Sunday. For centuries it has served as a day that the church remembers Jesus’ final entry into Jerusalem before His death and resurrection.

It was just before this entry into Jerusalem that Jesus raised Lazarus from the dead. John 11:18 teaches us that Jesus raised Lazarus from the dead in Bethany, less than two miles outside of Jerusalem. Bethany, like all towns near Jerusalem, would have been overrun with people coming to celebrate Passover. The Jewish historian Josephus estimates that 2.7 million people came to Jerusalem to celebrate the Passover. Even if this number is exaggerated, Jerusalem and the surrounding towns must have been packed to the gills with people. News of Lazarus’ resurrection spread like wildfire through the hundreds of thousands of people that had come to the region for this most sacred celebration.

According to Mark 11:1, Jesus began to make his way through Jerusalem’s eastern suburbs, Bethpage and Bethany, and stopped at the Mount of Olives. From there he sent two of His disciples to go and get a young donkey. He mounted the donkey and rode toward Jerusalem. As He entered the city a great crowd of people lined the streets. No doubt, there were people standing many rows deep along his projected path and they were holding palm branches and shouting Hosanna as Jesus rode in front of them.

There are important symbols in this account of Jesus’ entry into Jerusalem that teach us about Jesus’ purpose for coming to Jerusalem and how we are to approach Him.

Can you imagine what it must have looked like as Jesus rode into Jerusalem on a donkey colt? Donkeys are awkward looking animals with their long pointy ears and stocky bodies and Jesus rode a young small animal where His feet probably dragged on the ground. Jesus intentionally sent His disciples to get this donkey so there must have been a reason that he wanted to ride a donkey into the city.

The donkey signified Jesus’ purpose for coming to Jerusalem. When a king approached a city, he would ride on a horse, a large stallion, if he came to make war. If the king approached the city to make peace he would not ride on a war horse but on a donkey as a sign of his intention to make peace. Five hundred years before Jesus’ entry into Jerusalem the prophet Zechariah prophesied this event when he wrote:

Rejoice greatly, O Daughter of Zion!
Shout, Daughter of Jerusalem!
See, your king comes to you,
righteous and having salvation,
gentle and riding on a donkey,
on a colt, the foal of a donkey.

Zechariah wrote that Jesus would come gently and for the purpose of salvation and the symbol of His peaceful intention was His riding on a colt.

Jesus came to Jerusalem to make peace between God and sinners by dying on the cross. Romans 5:10 says, “For if while we were enemies we were reconciled to God by the death of His Son, much more, now that we are reconciled, shall we be saved by His life.” We were God’s enemies because of our sin, but Jesus came and reconciled us by His death so that we can have peace with God. According to Revelation 19:11-16, there will come a day when Jesus comes on His white war horse leading the armies of heaven to vanquish His enemies, but 2000 years ago he rode into Jerusalem on a donkey as a sign that He was there to make peace.

It has always been perplexing to me that so many people could greet Jesus with praise and adulation as he entered Jerusalem one day and then do nothing or even chant “crucify him” as He was killed a few days later. How did the crowd of tens of thousands turn from praise to hate or indifference so quickly?

Perhaps the answer to that question is in John 12:13 and the items those who came to see Jesus were holding in their hands. John 12:13 says that thousands who came out to honor Jesus carried palm branches as they chanted Hosanna while Jesus passed by.

Why did they bring palm branches out to see Jesus? Why branches at all? Why not branches from another tree? The answer is that palm branches were significant to the Jews and to those among them that wanted a Messiah that would overthrow Rome. The palm branch had been a symbol of Jewish desire to throw off the bonds of their oppressors for over two centuries by the time the crowds brought them out to cheer Jesus.

When Antiochus IV desecrated the Temple (168BC) by setting up an alter to Zeus and sacrificing pigs on the Altar of Incense, it led to a rebellion against the Greek king by the Jews. This revolt was led by the Maccabean family and was successful at driving out the forces of Antiochus that occupied Jerusalem. After the invading armies were driven from the city, the Temple was rededicated, and people brought palm branches to the rededication to celebrate successfully vanquishing the oppressors from their land. Later, in 141BC, when Simon the Maccabee drove Syrian forces out of Jerusalem he was greeted on the streets by great crowds of people singing music and waving palm branches. When the Jews finally did rise up against Rome in 66-70AD they printed coins with palm branches on them as a symbol of their desire to be free from Roman occupation. The palm branch was a symbol of the Jewish people’s desire for a Messiah to lead them to victory over Rome.

As we read these accounts of Jesus’ entry, the palm branches are a reminder of a group of people who wanted Jesus to conform to their understandings of a savior. They wanted a military and political Messiah, like the Maccabees, who would use His miraculous power to drive out the Roman oppressors and restore economic prosperity and circumstantial comfort to their lives. When Jesus refused to do that, instead focusing his last few days on Jewish hypocrisy, the crowds abandoned Him and left Him to be crucified. The palm branch is a reminder of a group of people who were only willing to follow Jesus as long as Jesus conformed to their understandings and helped them gain better circumstances.

Jesus is unwilling to be used by people to realize their dreams. Instead He calls His followers to give up all of their desires and adopt His desires as their own. In Luke 9:24 He says, “For whoever wants to save his life will lose it, but whoever loses his life for me will save it.” The follower of Jesus isn’t like the palm branch carrying crowds. We don’t exalt Jesus as long as He accomplishes what we want but abandon Him if He doesn’t. As followers of Jesus we are committed to Jesus and His total rule in our lives in every situation. Does the fact that palm branches were used in misidentifying Jesus’ identity and purpose mean we shouldn’t celebrate Palm Sunday or use palm branches in our worship? No, I don’t think so. We just need to be intentional about our focus. We need to remember Jesus’ entry into Jerusalem was to make peace between God and people. We need to remember the lesson of the palm branches that God calls us to complete submission to Jesus, not to submit to Jesus as long as He does what we want. If we choose to wave palm branches, we don’t wave them in solidarity with those along the road 2000 years ago who followed Jesus only if He helped them accomplish what they wanted. If we are going to waive palm branches, we wave them to acknowledge Jesus is the conquering king who has overcome sin and death and given us new life.

We will be talking more about palm branches, what it means to follow Jesus, and how God made that relationship possible on April 14. So join us on Palm Sunday as we dig deeper into the radical love of God that makes relationship with him possible.