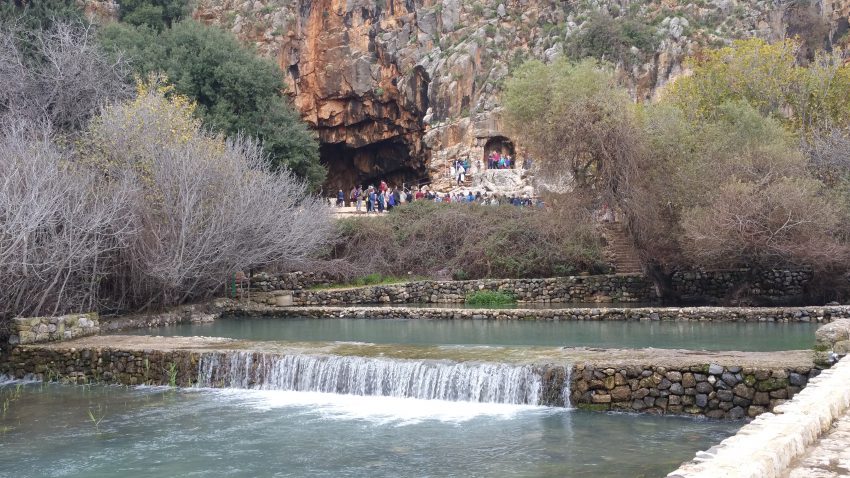 My husband and I were privileged to be part of the group that went to Israel in January on a trip led by Pastor Mike Golay. The trip provided new context to many of the Bible passages we have read over the years.

We traveled to Caesarea Philippi in Northern Israel, a place full of nuances in Jesus’ teaching. It’s where Jesus foretells the coming clash of good versus evil and the victory that He will achieve through His church in Matthew 16:13-23 and Mark 8:27-30. But first, the history of Caesarea Philippi.

In Israel’s earliest history, this was the land of Canaan, the land God promised to the Israelites as their inheritance, a land flowing with milk and honey. The area around Caesarea Philippi was part of the Israelite tribe of Naphtali’s inheritance, who never fully drove out the Canaanites as God had commanded. The Israelites were a shepherding people, the land of Canaan was a farming area. Is this part of the reason Israel soon began following the Canaanite gods of Baal and Asherah, believed to be fertility gods?

The Canaanites believed that Baal was the god of the sea, storms and death, and Asherah the god of fertility, the combination of which was thought to be of value to a farming community. The pagan worship practices tragically included child sacrifice and religious prostitution.

When the Greeks conquered the land, Baal and Asherah were replaced by Greek gods (Zeus, Artemis and Aphrodite), and others were added.  Hades was the Greek god of the underworld, or death, and Pan, half man and half goat, was the god of shepherds, flocks and rural areas, who lived in caves and was said to play a reed flute. He was known to make scary noises in the forests and incite fear, and the word “panic” is derived from this god.

When the Greeks first settled the area known in Jesus’ day as Caesarea Philippi, they named it Panias after Pan. When the Romans later conquered the area, they adopted the Greek god Pan and the associated rituals, even building a temple there.

Caesarea Philippi is located at the base of a cliff near Mount Hermon, where underground springs make up one of the major sources that form the Jordan River in the north. In ancient times, the spring came out from the mouth of the Panias cave, and the pool in the cave was so deep that a cord dropped in could never find the bottom. This was believed to be a dwelling place of the gods, specifically Pan, and pagans saw water as a symbol of the underworld and believed their gods lived in the underworld during the winter, traveled there through caves, and that it was literally the gate to the underworld (hades or hell). This area, though within the borders of ancient biblical Israel, was predominantly occupied by Gentiles with a history of pagan worship. God-fearing Jews avoided the area.

Imagine the disciples’ surprise, then, when Jesus took them right into the heart of this pagan community! Matthew 16 records that in this setting, Jesus asks the disciples who they believe He is, and Simon Peter replied, “You are the Christ, the Son of the living God.” (Matthew 16:16) Jesus tells Simon, as spokesman for the disciples, that he is now called Peter (rock) and declares that He will build his church on this rock, and the gates of hell (death) will NOT prevail against it. He also gives Peter (and the entire church in Matthew 18:18) the keys to the kingdom of heaven, which open the door of the kingdom to those who respond in faith to the gospel message.

There is much symbolism in Jesus choosing this location to reveal Himself as the Messiah. The “rock” of this location includes the cliff where the cave is located with the deep pool which was known as “the gates of hell” (death), the declaration of the truth of who Jesus is was made by Peter (rock), and the statement itself represents the rock of the Word of God. Jesus will overcome and build his church on all three “rocks.” Jesus charges his disciples with spreading the message of truth and salvation not only to Jews, but to the Gentiles at the ends of the earth.

Today, Caesarea Philippi is the Banias Nature Reserve, with trails for hiking and ruins of the ancient Greek and Roman temples to the false gods, including five niches carved out of the cliff that are the remains of a shrine built by the Greeks for Pan. The cave is there, but the spring water no longer flows from its mouth due to earthquakes that moved it to the foot of the natural terrace.

Viewing this area as a tourist brings conflicting thoughts and emotions. Such an evil place with a dark history is definitely sobering, but saturating it with light brings deep meaning and understanding of the ultimate victory. The transfiguration of Jesus, which occurred within days of this visit to Caesarea Philippi, likely occurred on Mount Hermon towering above the “rock” of this place.

Jesus’ word is true. This physical rock has been overcome, Jesus has overcome death and the church is spreading to all corners of the world. Amen.

Debbie Hoffman has been attending Friendship church since 1985 and has been on staff since 1991, currently in the role of IT Director. Travel, reading, spending time with grandchildren, family and friends top the list of enjoyable activities. Debbie and her husband, Jim, have two daughters and two sons, as well as seven grandchildren.